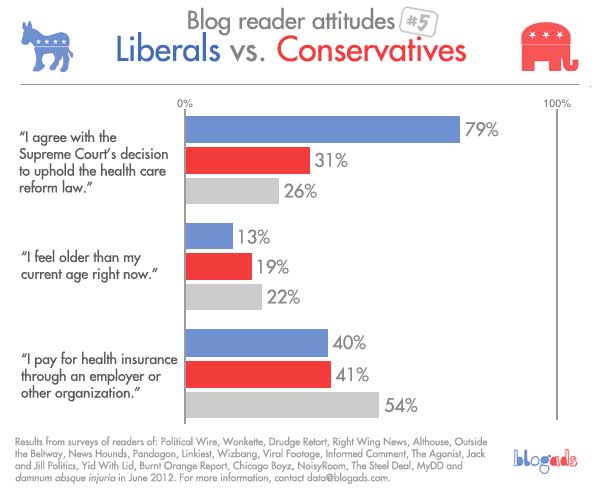 This data is in sharp contrast to polling done in the days before the ruling yesterday, in which a plurality of Americans hoped the Supreme Court would not overrule healthcare law. Is our data wonky or is there a serious undercurrent of dissent here?

The poll, taken after the SCOTUS decision to uphold the Affordable Care Act, shows that liberal blog readers are over 2.5x more likely than conservative readers to support this ruling.

To round out today’s post, we’re including some background data gathered in recent weeks on people’s health and health care coverage.

Conservatives are 1.5x more likely than liberals to feel older than their current age.

Yet, liberal and conservative blog readers are equally likely to pay for health insurance through an employer or other organization, and 14% less likely than the internet average. 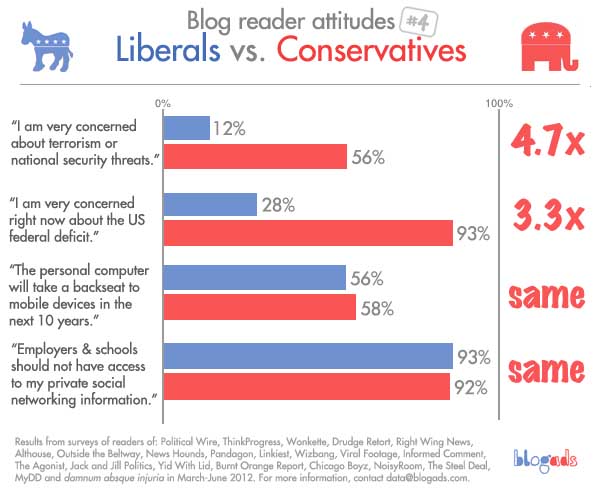 While our recent surveys have focused on ways in which conservative and liberal blog readers disagree, this week’s results show they do actually agree on some things.

Readers of liberal and conservative blogs agree that the personal computer will take a backseat to mobile devices over the next decade. They also feel strongly that employers and schools should not have access to their private social networking information.

Fans of political debate will be relieved to know that America’s political polarity has NOT yet subsided.

Conservative blog readers are more than four times more likely to be very concerned with national security threats and more than three times more concerned about the US federal deficit.

Ever wonder why do partisans’ views on things like mobile phones and school privacy match so neatly, while opinions on issues like US security differ so strongly?  Most likely this is because the parties have not (yet!) staked out positions on those issues.

As Ezra Klein notes in the June 25 New Yorker,

Each of us can have firsthand knowledge of just a small number of topics—our jobs, our studies, our personal experiences. But as citizens—and as elected officials—we are routinely asked to make judgments on issues as diverse and as complex as the Iranian nuclear program, the environmental impact of an international oil pipeline, and the likely outcomes of branding China a “currency manipulator.”

According to the political-science literature, one of the key roles that political parties play is helping us navigate these decisions. In theory, we join parties because they share our values and our goals—values and goals that may have been passed on to us by the most important groups in our lives, such as our families and our communities—and so we trust that their policy judgments will match the ones we would come up with if we had unlimited time to study the issues.

Posts about our prior survey results are here, here and here. 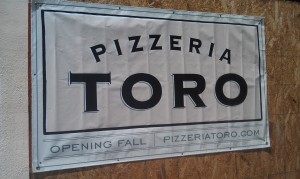 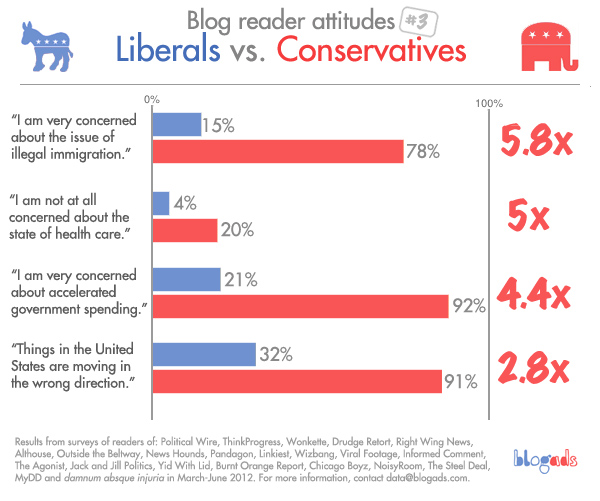 On linchpin issues of illegal immigration and increased government spending, conservatives are more likely to be “very concerned” than liberal blog readers. END_OF_DOCUMENT_TOKEN_TO_BE_REPLACED